“My mother can go to hell, and Ted Chaough can fly her there!”

Don sure needs to be in control, huh? Jesus Christ. He’s an insidious prick to Ted, does a whole dominant thing with Sylvia, all to feel some modicum of control in the chaos of the merger. Didn’t quite think that one through, apparently. At least Roger got to fire Burt Peterson again.

One of Don’s central traits is his endless yearning for freedom while also craving control over his life. I mean, the guy reinvents himself at every available turn, what else were you expecting? He’s consistently isolated as a result. People flit in and out of his life all the time, he’s seemingly never Not surrounded by people, but because he doesn’t truly connect with anyone he’ll always be alone.

Natch, we spend our lives thinking we’re the lead in our own movie. Truth of the matter is that nobody thinks about us as much as we fucking do, but we all intrinsically understand that we’re a part of something larger. Don doesn’t really get this. And yeah yeah yeah– it’s a show, he’s the protagonist, our beloved antihero, but he elevates himself to this bizarre mountaintop where he cannot fail, he can only Be Failed. Good way to avoid responsibility, if that’s your bag.

The way Ted settles in for a margarine rap sesh with his colleagues as opposed to Don sitting alone brooding in his corner office says a lot; these guys are night and day, camaraderie and spitballing versus fear and lofty expectations. Don expects everyone in his life to be a skosh like Sylvia in that lovely hotel room; waiting with bated breath for him to appear and liven shit up. Instead of collaborating with his coworkers, Don wants to be the guy who drops that Perf  Lightbulb Idea(TM) in a moment of pure clarity and meaning, blowing everyone’s fuckin socks off with his brilliance. 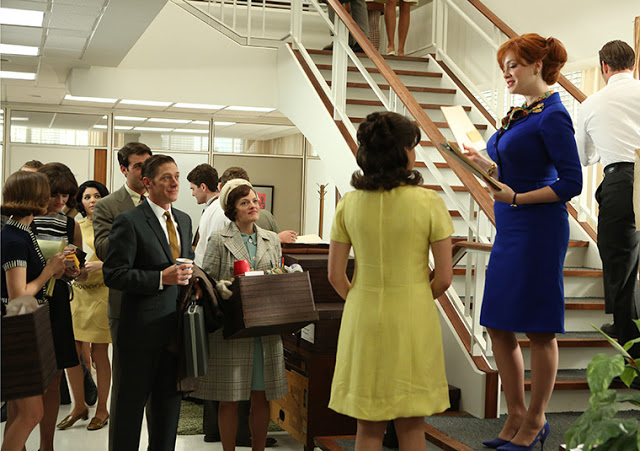 As a faux olive branch, Don brings some booze to Ted’s office under the guise of yapping about margarine. What he’s really doing is drinking Ted under the table to assert some sort of dominance, and Peggy is of course grossed out by Don’s behaviour. It’s funny though; as much of a brilliant, mysterious and imposing figure Don may be at the office, Ted will forever have one on Don because he was the one who flew them to that Mohawk meeting. And that’s just suave as hell.

Sylvia dreamed that Ted’s plane went down, and that she returned home, back to her life after being adrift. Don of course immediately twists it to mean that she missed him– what’s that about everyone being unbelievably fucking self-involved? As she definitively ends their ongoing affair, Don’s façade crumbles. Dude is grasping at sand.

Of course, Don is entangled in his Alpha Man(TM) horseshit and cannot grok the real meaning of what Sylvia is telling him. At this moment it’s incredibly striking how plain it is that Don is a guy without a real home; he brings his ‘change the conversation‘ work ethos home, and his personal relationships suffer as a result. So while Sylvia feels a great deal of comfort in returning home, Don feels nothing. As Megan talks about her day, his mind reverts to TV static.

As Don zones out, Peggy is busy building a life with Abe in a truly terrible apartment building. We’ve got Pete attempting to care for his mother while trying to get back into Trudy’s good graces. Bob Benson is trying to connect with Joan, who wants her son to thrive in a post-Greg world while navigating a complicated relationship with her mother; Don doesn’t seem to see the value in these sorts of human connections because the moment shit goes remotely sour dude is out the fucking door.

After all, in the very same episode where he split with Betty, he formed a new ad agency. Damn, dude.

“Damn it Burt, you stole my goodbye!”

victoria is a two time state yelling champion, who has dreams of one day finding a box of money. the steady drone of media and the unending hellscape compels her to flail at her macbook. this blog is her story.