“If you don’t like what is being said, change the conversation.”

This episode is all about ch-ch-ch-ch-changes. But Christ, does Ann-Margaret have a shrill singing voice.. that Bye Bye Birdie clip makes me cringe every goddamned time. 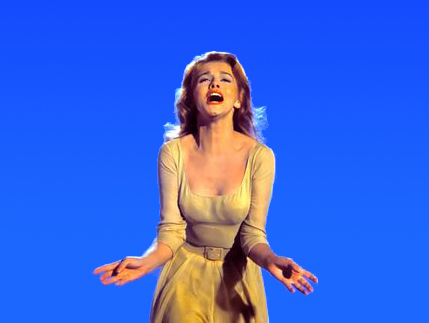 Don and Betty have an awkward courtesy dinner with Lane and Rebecca Pryce. It’s plain that Rebecca hates living in the States, and Lane not so much; there’s tension galore, not unlike the Drapers. The mood is heady and tense, both women seem out of sorts and distracted. Rebecca is reserved, curt, and very cultured — and most likely intimidates Betty.

Kinsey has a Beatnik style meltdown in the Penn Station meeting, so Roger and Don are ordered to save it. It’s fucking Madison Square Garden, after all! Pete has a good Blue Blood Yankee moment in that meeting, going into full Peter Dykeman Campbell mode. Like Don, he’s a guy who doesn’t really know how to be an actual human man just yet, but he’s figured out the correct personas to adopt in the correct situations.

Roger is pissed (and a little sad) that his divorce is having such an apocalyptic impact on Margaret’s wedding plans, thanks to Jane’s well intentioned but overcompensating friendliness. He doesn’t really understand that his divorce from Mona and marriage to Jane has created a paradigm shift around him, in the way people see and treat him just a little bit. He wants to feel as if nothing’s different; that Margaret will be immediately accepting of Jane, that Mona will play nice. Sorry Roger, that ain’t how real life on this planet works. Times are changing.

Naturally, Don fires some subtle shots before the potential client shows up. 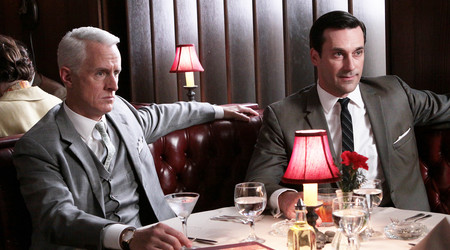 As he and Roger try to convince the MSG guy that all is well, Don drops some iconic Draper realness on the table in front of him. A man who himself is trying to change and be better, he’s got some things to reflect upon.

“Let’s also say that change is neither good or bad. It simply is. It can be greeted with terror or joy: a tantrum that says, ‘I want it the way it was,’ or a dance that says, ‘Look, it’s something new.’

“I was in California. Everything is new, and it’s clean.. the people are filled with hope. New York City is in decay. Madison Square Garden is the beginning of a new city on the hill.”

New York City is about to become an absolute shithole within this decade, and it appears Don sees it sooner than most. Living in California now, I see the hope and I see the newness; the clean not so much, as it never fucking rains in Southern California and everything is consistently covered in a fine layer of desert dust. Anyway.

The ink isn’t even dry on the check and then, just like that, Lane shuts down Madison Square Garden at the behest of the home office in London. Don isn’t having it. They’re not seeing the big picture and how much business it could potentially provide, so he’s understandably pissed off at Lane, wondering why PPL even bothered to buy Sterling Cooper in the first place. Lane doesn’t have an answer, but absolutely appears to be as frustrated as Don.

Peggy brings in some storyboards for Patio to an obviously pissed off Don. Stunned that he hasn’t seen the movie yet, she has him watch a bit of Bye Bye Birdie. Watching Ann-Margaret belt out the namesake song, Don is completely entranced to Peggy’s chagrin. Bad mood evaporated, he’s engrossed in this image, this idea of purity.

Back on earth, Peggy thinks it’s a crock of shit; it’s fucking phony, and she’s right. Women are the target audience for a diet soda and not men, to whom this ad is appealing to way more; Don sides with the dudes. Peggy wants to change how she approaches her business and how to really get into the minds of women, do things differently, instead of this oldschool stuff.

Standing out in every way, Peggy’s no Ann-Margaret, not a Joan either. She is her own person, navigating a shifting world and being as true to herself as possible. On her way home, she pops into a Brooklyn bar and ends up chatting up some rando; she tries Joan’s “it’s so crowded in here I feel like I’m on the subway” line which charmed the hell out of male clients in the office, to some success with said bar rando. 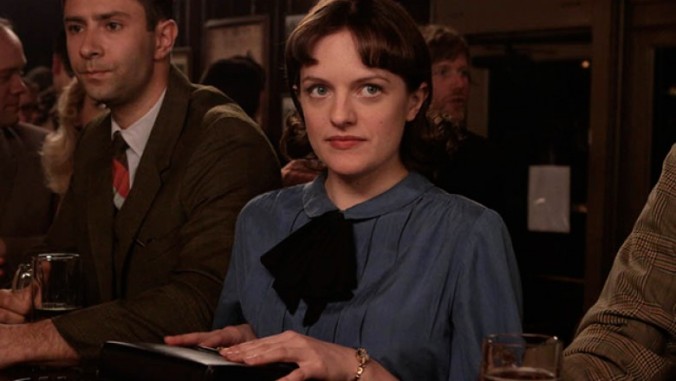 He incorrectly assumes she’s some broad from the steno pool, and she doesn’t deny it; can’t let it be like that nightmare date with the vending machine truck-driving idiot from Season 1. They have a bang in his dumpy apartment on a pullout couch*, and she immediately bounces; he seems upset.

*(But really, how can a human sleep on one of those fucking things? It’s a dystopian nightmare of unnecessary bars. Nope.)

In the wake of Gloria leaving Gene, Betty has no idea how to help her father. He’s gone from being the formidable patriarch of the family to needing consistent care. Inviting her bother and sister in law/kids to bring her father up for the week of Spring Break, she wants to feel closer to him; she can’t get him on the phone and feels disconnected from his life.

At the same time, she resents William and is a touch jealous that his wife Judy can relate to him better that she can, while also being his nurse. Betty wants to feel more connected to her family, to mean more in spite of how everything is rapidly changing around her.

Her brother William is being absurd per usual, stating that Gene has to be in a home or they move into the house to care for him (and getting the house in the process..), and Don stands up for Betty.

William: “Look Don, we’re all upset. One thing I’ve learned from this– Don’t get old!”

William: “It’s a real jackpot. He always said he didn’t want to be a burden, and yet here we are.”

Don: “This is what’s going to happen. You’re going to explain to your sister and your wife that we have reached an understanding. You are going to support your father financially, and I am going to take him into my house. His house will remain untouched.”

William: “I appreciate the advice, Don.. I’ll take it under consideration.”

Don: “You’re going to go out there, and you’re going to tell your sister that this is what you want. We’ll pretend that you did the right thing on your own.”

WIlliam: “Are you kidding me? How are we supposed to get home?”

William: “You want him? You got him.”

It’s a nice moment of generosity and true consideration from Don, though some of it is definitely rooted in Alpha Male(TM) dickwagging. As William uncharacteristically offers this info to his wife and his sister, Betty realises that Don played the massive part in this sudden change of heart. She looks at him with intense relief and adoration. 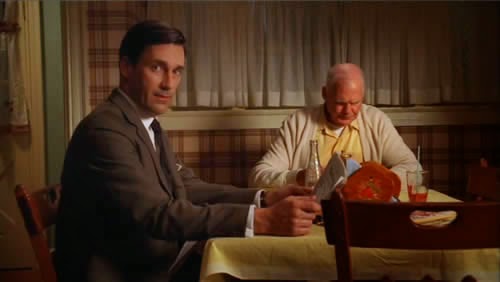 And then, a confused Gene wakes up in the middle of the night, dumping all their booze down the drain because he hears the sound of sirens and thinks it’s prohibition times. Back to reality.

Ah, and here’s Sally’s hippie teacher happily dancing around a damn Maypole. All Drapers are in attendance watching Sally in this display of springtime innocence, Gene included.

Don looks at Sally’s teacher, shielded by his aviators, yearning for something as he strokes the cool grass below his chair. Thinking about Patio and Ann-Margaret earlier, there’s a link with the teacher. “It’s pure. It makes your heart hurt… [She’s] young, excited, and desperate for a man.” More to come on her, no pun intended.

Oh yeah, and Margaret is set to be married on November 23rd, 1963. Hahahaha.. oy vey. As practically everyone knows, JFK was assassinated on November 22nd, 1963; this is just a sample of things to come, the massive, seismic changes looming within this decade. The folks we know on Mad Men are in for a wild ride.

“This is the greatest city in the world. If you don’t like it, leave.”

2 thoughts on “Mad Men s3e2: Love Among the Ruins”