“I bet I could get a date with your mother right now.”

Ah fuck, this is the episode with THE LETTER. Iconic Don Draper shit, kiddos. 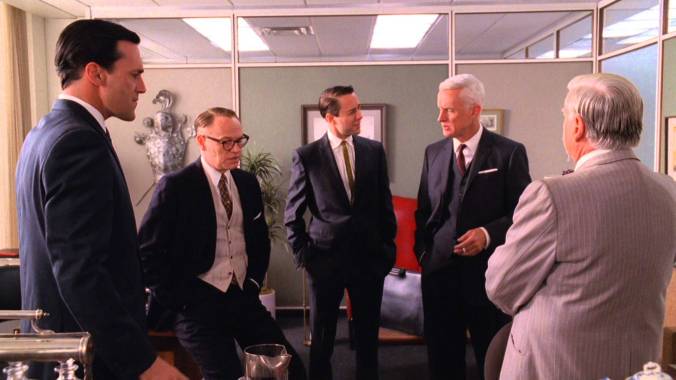 Turns out desperation truly reeks, as Don takes meeting after meeting and is met with continual rejection, a feeling he ain’t used to in the slightest. SCDP is teetering on the edge without Lucky Strike, and everyone in Manhattan seems to know it.

Hey, remember Midge? One of Don’s OG boho mistresses, she happily runs into him in the lobby of the Time Life building, but all is not as it seems. Don’s genuinely happy to see her at first, this familiar link to who he was just a few years back.

When he told her that he had been expecting to run into her in The Village, maybe he was hoping they would reconnect or have a catch-up sesh about all the seismic changes in his life this past year; he seemed crestfallen to learn how far she had tumbled, and that her reasons for seeking him out were motivated by cash. Ugh.

Turns out Midge is married to some idiot and lives in a real shithole now, with no use for a check. Said dolt lets it slip that she sought Don out and didn’t just happen to be in the Time Life building that day.. thanks, heroin.

Don gives her some cash for a painting, staring at it once he gets home, lost in the void. Maybe he’s not that dissimilar from the trapped junkie who sold it to him; someone willing to whore himself out for cash from Lucky Strike. Seeing Midge could be a partial wakeup call for him, maybe an extreme glimpse at what could’ve been had he not cut back on his boozin’ earlier this season.

Snapping out of the void, Don starts writing. After all, part of Don’s entire life mantra includes “if you don’t like what’s being said, change the conversation”. Midge’s knob of a husband informed Don that the painting is an after-image– what she sees when she closes her eyes. Time to change the after-image of SCDP post-Lucky Strike.

Tearing the pages out of his sobriety journal, he’s set on moving forward and can’t seem to shed that dark period of his life quickly enough. In the process of creating this defiant statement, Don ditched an honest part of himself with his journal’s pages to make way for this very public (and fundamentally faux) declaration of independence.. looks like he’s done dabbling with authenticity for the time being. Nothing like splashing out for a page in the Times, huh? 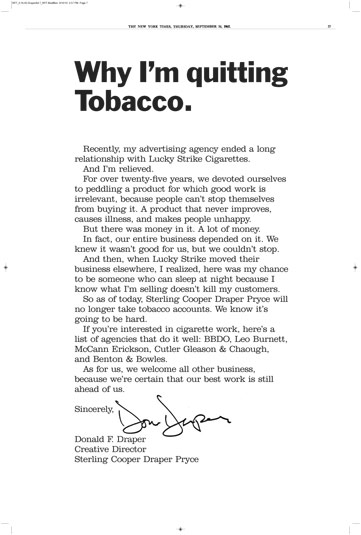 I mean, GODDAMN. Natch, the other partners do not react well. Don didn’t sign their names, nor did he tell anyone about his plan. Then again, it seems to have done its job; the phones are ringing off the hook at SCDP, and it’s not all bad news.

Both Don and Betty act out of self interest in this episode, damaging others in their wake. Sally is growing up and becoming more of her own person, to Betty’s chagrin and vague confusion. Sally is absolutely a different person than Betty is at this point, and she has limited context for how to relate to her daughter outside of Dr. Edna’s sessions.

Sally and Glen have stayed in touch, and sneak off to hang out in secret as kids sometimes do; Betty finds out and has a fucking meltdown. In a fit of bizarre jealousy over Sally and Glen, she announces to Henry that it’s finally the right time to move. Poor Sally.

Paired with Lucky Strike leaving, Don’s tobacco tantrum on a full page of The New York Times gets a lot of people laid off.. Faye Miller included. Time for all the partners to pay up, let people go, and keep the lights on. The junior partners have to put in 50 grand apiece to keep the company afloat, and Pete doesn’t have that kind of cash. Turns out it’s not that big a deal, as Don pays Pete’s share; a very generous nod to his discretion with that whole Dick Whitman mess.

“I heard from all my clients this morning, mostly out of morbid curiosity. But one thing’s for sure, they’re not talking about Lucky Strike anymore..”

Everything is uneasy, but in the midst of it all, Megan lets Don know that she ‘gets’ the letter and what it symbolises; one of the few times that day that Don breaks his Draper façade. And, Megan is the other person in the office aside from Peggy who comes to Don with something resembling a positive reaction, some form of understanding what exactly it is that he’s trying to pull. It feels different that day at SCDP.

And she’s right, Don does stand for something.. even if it’s through the guise of an ad rooted in a self-serving motive.

“I thought you didn’t go in for those kinds of shenanigans.“