Hello hello, and welcome back! I’m really looking forward to writing about this season, because season 5 is where shit starts to get dark. Right out of the gate, there’s talk of death, intense bitterness, underlying messes, how nothing is as it seems.. with a nice dash of good old daddy issues and Fragile Man Feelings. We pick up a few months after the conclusion of season 4’s Tomorrowland, Memorial Day Weekend 1966.

Staking your own spot in the world is at the forefront of this episode, with our main characters desperate to mark their territory. Pete vs Roger (and the fight for an office sans support beam), Megan showing off her marriage (and dope-ass home), Joan finding her identity through work (and not just being a mother), Lane and his place in the USA. 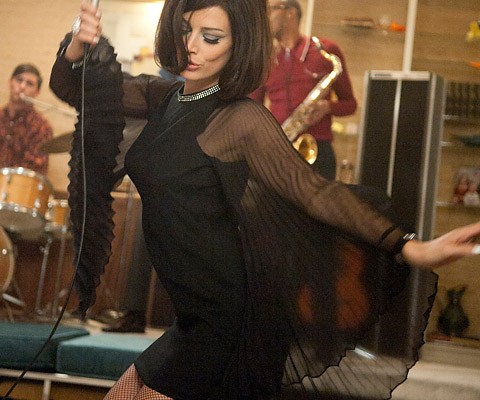 There’s a lot of Don and Megan in this episode, and they’re both starting to realise exactly how little they actually understand about one another. Don, as he is wont to do, assumed Megan would be simple and uncomplicated; turns out she ain’t no Canadian Barbie, she’s a real person. Ssssssshocker. The man is seething over the surprise party she threw for his 40th, especially inviting everyone into their home and the iconic Zou Bisou Bisou. As a happy go lucky girl, Megan can’t fathom the idea that Don would never want a birthday party, much less a big ol’ surprise involving making him the center of attention.

“It was my money, and you don’t get to decide what I do with it.”

“Well, could you please not use it to embarrass me again?”

“When is that gonna stop? Only you know that. This is your birthday now.”

“Fine, I don’t like my birthday. I told you, I never had it when I was growing up and I’ve never wanted it since.”

“You never had a birthday? Didn’t Betty ever throw you a party?”

“No, because I forbid it.  I don’t need to be the center of attention.”

Well, the good news is that Don was up front with Megan about his Dick Whitman. And we all know that Don loves attention as Megan astutely points out; but he covets control, and wants attention on his own terms. Tale as old as tiiiiiime.. 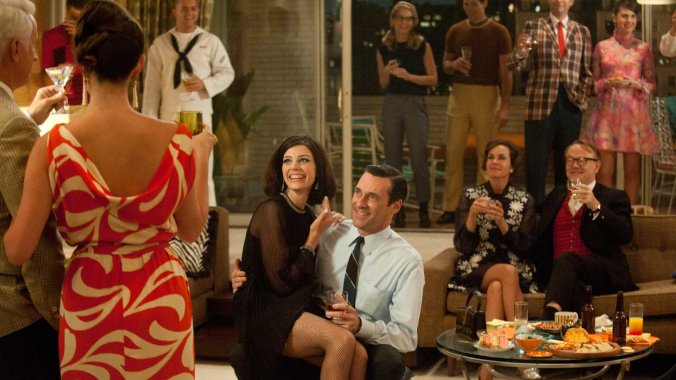 Switching gears, Lane finds a dude’s wallet in his cab, within which is a photo of busty Dolores; when Lane rings the owner, she’s the one that answers. He’s very flirtatious on the call, the man Lane imagines himself to be, suave and daring. Reality slaps him in the face when a disheveled fat dude in a hat that looks like it got run over by the E train comes to pick up said wallet. Boner killer.

Lane’s pining for something he doesn’t have, something he got a taste of last season with his Playboy Bunny ladyfriend. He fancies much more than just being the office middleman. I feel like that’s a big part of why he lets everyone out of their contracts to create SCDP in the first place– he wants to be one of the power players, the execs who get the gal and the cash and the respect and the power.. much like Don supposedly has.

And instead he has his vaguely severe wife, piles of bills, and he feels powerless. The titty photo is what he longs for, but like much of everything else in his life, is denied him. His effervescent longing gives him the get up and go. Lane has always been a man who feels desperately out of place, ironically looking to Don who’s pretty much in the same boat. Little does he know it’s mostly an illusion of happiness on Don’s front.

That 40th birthday party is the ultimate illusion of happiness, partly shattered by Peggy throwing some particularly uncouth Heinz-related shade. We see Pete’s suburban dreamhouse in Connecticut, a city boy woefully out of place in the wood-paneled country. He really thought that he wanted the life Don had back in 1960, and now that he’s got it (complete with a near-identical hideous knotty pine kitchen) it’s not all it’s cracked up to be. Trudy hasn’t quite yet returned to her effortlessly chic self post-baby, and as usual Pete has no earthly idea what he wants, just that he yearns for so much more of it.

Joan is at home with her newborn and mother in tow, yearning to head back to work and to feel relevant again. Being a mother isn’t enough for her to feel needed, to feel important; and the private barb SCDP throws at the racist Y&R hiring policy doesn’t help, thinking they’re looking to replace her.

Looks like Roger and Jane’s marriage has run its course, with the amount of seething tension between them. Seems nice on the outside, but there’s no depth there.. more on this shocking story at 11. Roger is being rapidly outpaced by Pete at the firm in terms of bringing in new business, and he feels somewhat listless as a result.

Almost every character’s story centres around those fantasies of happiness. Let’s be real, we can all concoct a perf Happy Ending(TM) in our imaginations, but then we get to live with the messier (and oft disappointing) realities that come with it. Everyone coveted the gorgeous, immaculate white carpet Megan saw in that interior design magazine, but the reality is that they all wound up with the filthy version in Don and Megan’s place that survived that birthday party.

“Well, I want you to be happy. Somebody should be. You know, two weeks ago, Jane asked me, “Which one’s Mussolini?'”