Welp, the cat’s outta the bag re:Lucky Strike and everyone at SCDP collectively shits themselves. Don, Pete, Peggy, Roger and Joan all get a certain sense of fulfilment from their work that their home lives just cannot seem to provide; having the possibility of SCDP being no more really scares the bejesus out of everyone, but especially the aforementioned guys and gals.

Sunday night. Kenny is out with his fiancée and her parents (including Leland Palmer), and inadvertently gets the Lucky Strike news and blows shit up. The partners (sans Lane, who’s still in London picking up the pieces) all anxiously gather at the office as Roger puts on a show, faking a phone call to Lee Garner Jr in an attempt to save face and pretend he’s in the dark. He’s sat on the news for whatever reason, mostly embarrassment and booze I’d guess. Nada on the new business horizon, apparently.

image courtesy of Monsters of Television

When he fakes a last plea/flight down to the North Carolina HQ and rings Joan from his Manhattan hotel hideout, she understandably ain’t impressed. Somehow, Roger thought that maybe this crisis on top of the alleyway mug-bang would bring her back to him; instead, it’s reminded her of why she keeps her distance. Candor isn’t inherently negative, but when it’s rooted in some vague form of lazy self-immolation tinged with pity party, it’s a bad look.

Oh hey, Pete has a daughter! Then he hits up the most cringe-worthy funeral on the entire planet earth. A big account dude from a rival company died, and the partners deemed it astute to try and poach clients at the funeral; a desperate decision. The guy’s former colleagues are telling old war stories, as his widow and daughter look on; they appear glazed over as if they’ve all heard this work junk a thousand times before. They talk about David Montgomery The Man, but seem way more interested and animated when talking about David Montgomery The Adman. Clearly, the guy devoted a lot of his life to his work.

Granted, there’s truth bombs here — nobody on their deathbed wishes they’d worked more, and this sentiment washes over Don and Pete. I mean, look at Pete; missing the birth of his own daughter to chase a hearse. I know it wasn’t uncommon in the 1960s for fathers to be absent for the birth of their children, but this is pretty bleak. It’s one of the shittiest times they’ve experienced to date, business-wise, but hitting up a funeral for this purpose is grasping at straws. The last days of Rome.

Shocking statement: Don Draper is a self-loathing guy with a whole heap of fucking mommy issues. With his continual banging around, he seeks out the unconditional love he never received from a mother figure, and will go after anything that even vaguely resembles love like a moth to a light.

With the loss of Lucky Strike, Don is tense as hell and Faye is dunzo.. she’s pretty much stuck in a lose-lose situation with Don at this point. If she doesn’t break through her own Chinese Wall of business ethics, to Don it looks as if she does not care about him enough and wants him to fail. Pretty damned big leap there, Donnie, and real unfair to put Faye in that position. 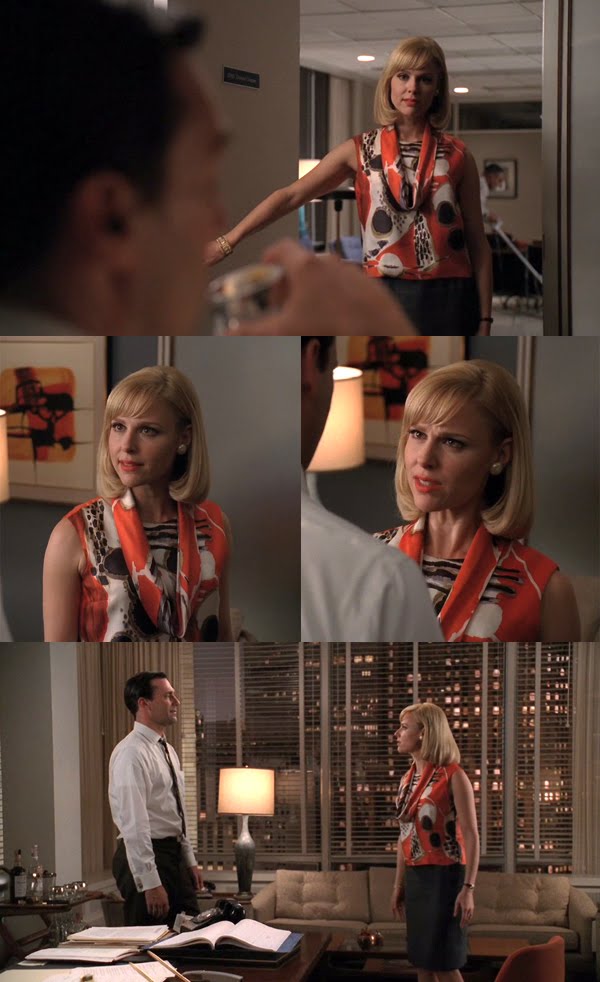 And in the end when she throws him a bone in the form of non-ketchup related Heinz, Don is very happy for the meeting.. but he also loses any remaining respect for Faye. Ugh. I mean, I never thought they were a great match to begin with, but he doesn’t need to be such a shitheel about it.

These two conflicting feelings are a fucking mess. His unrelenting thirst to be unconditionally loved and the unwillingness to actually accept unconditional love out of self-hatred means Don is probably going to be banging around for the foreseeable future. But this yearning to feel something and glimpsing it in rando beds is grounded in the very core of his character.

Meanwhile, here’s Megan saying all the right things at the right times. She even fixes the busted Clio Don hurled across the room post Glo-Coat exit call. She’s interested in the inner workings of his job and how it all works at SCDP, which Don is obvi totally into.. and they have an office bang. Megan is modern and savvy, letting him know point blank she understands this has nada to do with work (unlike Allison) and won’t have a fucking meltdown (also unlike Allison). Go girl, get it.

Speaking of banging, Peggy is seemingly unflappable in her post-bang lavender haze despite walking into the Lucky Strike apocalypse the next day. I guess Abe learned to put less of his foot in his mouth. She even uses her encounter with him to flavour her Playtex gloves presentation, just like Don has used his personal life in past work. Ooh la la!

“Every time something good happens, something bad happens.”