“I can use my expense account if I say they’re whores!”

Welcome back, and welcome to 1964! It’s nearly a calendar year from where the Season 3 finale left us, and Sterling Cooper Draper Pryce has an actual office that isn’t a hotel suite; they’ve got some cool new digs in the cushy Time Life building. Maaaaagic.

“Who is Don Draper?”

Bombing out in an interview with Advertising Age, Don supplies glib bullshit answers to the reporter’s pointed questions about his work and who he is, pretty much saying fuckall. Shocker. The problem with this approach is that he’s no longer just that stupid talented mysterious guy in the corner office, he has to be the fucking face of SCDP; a creative figurehead, the man behind the curtain. And we all know how much Don loves talking about himself.

But hey, Don is in a great place professionally; he’s legit blowing up. He’s calling the shots and running things his way, making a lot of money, and he’s got acclaim for the Glo-Coat commercial.. all the while his personal life is a raging tire fire, burning into the eternal night. Seems like Don is at his best in the office when shit at home is a mess. 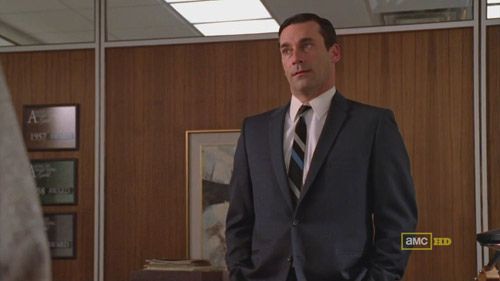 no time for your shit. || image courtesy of Tumblr

His attitude in meetings is more aloof than ever, while being incredibly sharp; the way he shuts down those Jantzen prudes is outta control, he’s got precisely no time for garbage at this new agency. This guy is forward thinking and takes risks, and he’s lost everything he ever (thought) he wanted in his personal life.

Our characters are exploring new terrain all over this episode, slowly adjusting to the new normal. Betty now has a mother-in-law (a hard-ass woman at that) and an extended family; she’s also got a more attentive husband and is learning how to be a person sans Don. She’s overly harsh on Sally during Thanksgiving dinner, still not quite sure how to navigate that relationship.

Understandable growing pains and lots of negative shit are to be expected, but Hank Frank takes it all in logical stride; he really loves that difficult woman. They even have a bang in the car, harkening back to their first kiss in Betty’s car. YEAHHHHHH

Going on a date with the poor man’s Betty, Don is vaguely bemused with Bethany. Brass tacks, homegirl is an idiot, but she’s young so I guess she gets a pass? Maybe? Ah well. Roger and (mostly) Jane seem determined to set him up with someone, just because.

Dating doesn’t seem to suit Don at all. Skipping out on Thanksgiving at Roger and Jane’s and no plans with the family, Don’s plans include being mounted and slapped in the face by a hooker. Looks like he bones this lady on the reg, indulging his own self-loathing with a healthy dash of mommy issues.

His personal life really seems a lonely mess, and he’s boozin’ a lot, even for him. When Peggy needs bail cash for the ladies she and Pete paid off to fight over a ham, Don takes it all out on her unsuspecting bland boyfriend Mark, whom she brought to lessen the inevitable blow.

Joan has her own office, and is still the consistent go-to for everything. Glad she’s getting some recognition as the person who steers the ship, though she shouldn’t be getting sunburned tit Harry Crane a coffee. And it’s nice to see Peggy argue right back with Don when the Sugarberry Hams stunt goes south, her confidence is awesome to see. Roger is back in the saddle and full of beans, Pete is more secure in his footing.. everyone seems to be moving forward at a pretty brisk clip working together, conference table or no. Even Allison is back!

However, Don’s shite interview in Advertising Age has real consequences for the firm; being in such a small space equals his actions have actual meaning, something that is clearly not a thing to Don. Ya fucked it up. He takes it out on the straightlaced Jantzen guys by blowing up their meeting, and immediately rings Cooper’s guy at the Wall Street Journal to have a redo of that interview. Taking that feeling by the balls, he is cocksure and rewrites history ever so slightly to sound fucking awesome to this guy. Way better. 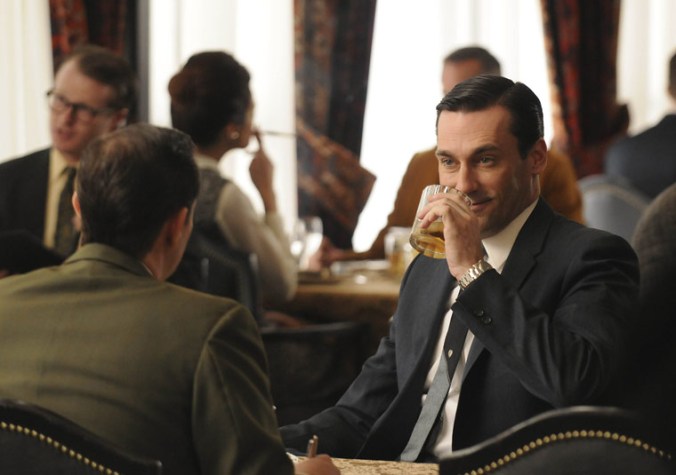 So, what’s it going to be? Comfortable and dead, or risky and possibly rich? Sounds like a mantra to me, looking at how Don has evolved. SCDP sure seems intensely personal to him, especially for a man who won’t reveal a damn thing about himself. Let’s see what happens!

“You know something? We are all here because of you. All we want to do is please you.”