Hello hello! I am back in LA after a cold jaunt to New Jersey for my annual xxxmas pilgrimage. Believe it or not, another year has gone by, and I saw a ton of fucking movies. Here’s my favourites, the ones I thought were sort of “eh”, and the absolute piping hot messes of 2016.

Spoilers ahoy, so no bitching. 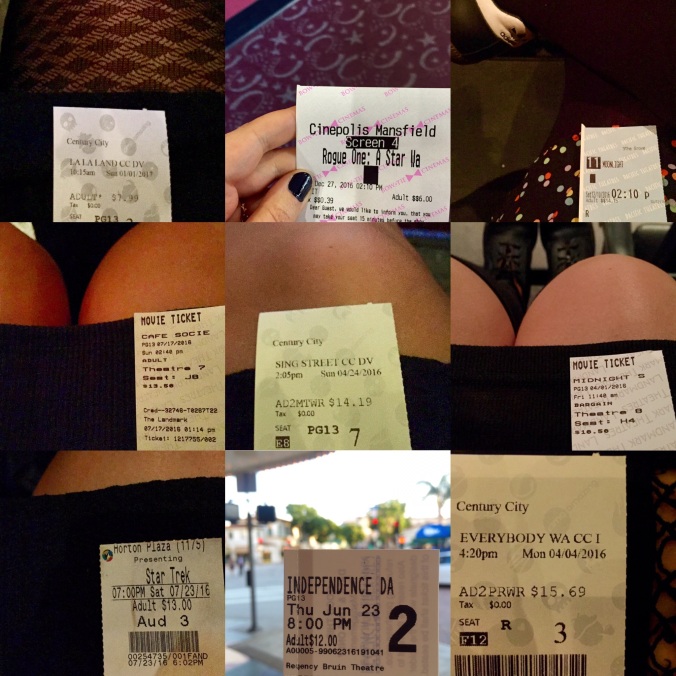 In no particular order..

And there you have it! 2016 had some really great flicks for sure. I’ve still got a few movies to see.. but nobody can pay me enough cash to give an iota of a shit about Casey Affleck.

Don is a man forged from being on the run from his own past, and he’s honestly never stopped. We almost see two distinct people with Don Draper versus Dick Whitman, but the reality is that they are one in the same. He’s an isolated, terrified guy ready to blast out of his escape hatch at the drop of a hat.

Watching Don put up this tough guy front only to be sincerely threatened by Pete’s “I KNOW U” speech is nuts. As soon as Pete leaves his office, Don’s entire demeanour crumbles and changes.

When you think a glimpse of who this ~mysterious Don~ really is will come through, some sweaty maniac emerges at Rachel’s apartment pleading with her to bounce from Manhattan posthaste. That’s unfortunate. Thankfully Rachel is pragmatic and sees through his rambling nonsense and shuts it down immediately; she calls it like it is, and compares him to a knobhead teenager for jumping at the gun to Run Away Together(TM). She ain’t wrong.

Truth be told, Don’s literally never given a second thought to his actions; the man is compartmentalised to a fault. As soon as she brings up his children it’s plain the idea has simply never dawned on him.

During the Election Night festivities, someone vommed Creme de Menthe in Peggy’s trash can, and she is not pleased (I wouldn’t be either, Pegs- it’s gauche). To top it off, someone jacked her cash out of her locker during the election day party the night before– rude. Don is already on edge from Pete being in his office uninvited, so after he comes back from Rachel’s rejection to see a weepy Peggy in his personal space the guy is immediately pissed off.

Her complaint to the building sadly ended with a janitor being fired, and she’s upset about disrupting an innocent person’s life. This is a notion that’s literally never fucking occurred to Don Draper. Suddenly, he gets an idea.

Steeled from being shot down by Rachel, Don goes and puffs his chest at Pete, standing over him in the dark.

I mean, DAMN. He then lets Pete know he’s going to hire Duck Phillips as Head of Account Services, who will be one of the more ludicrous characters in the seasons to come.

So, he calls Pete’s bluff and they go to Bert Cooper’s office together, Pete thinking dropping the bomb about Don’s Dick identity will somehow result in a promotion. Bert Cooper has the most realistic response imaginable, and Pete’s smear campaign is squarely halted.

Cooper’s been around the block, and he knows that at the end of the day, this isn’t a massive deal. But don’t think that means he won’t keep this little factoid knocking around in the back of his mind for future gain. After all, one never knows how loyalty is born. How and Why did Don end up at Sterling Cooper, anyway?

Turns out Dick Whitman is a goddamned klutz and literally (accidentally) blows up the real Don Draper in Korea. I love that this story is the most ridiculous thing imaginable, and not some hard boiled noir story of identity change.. after some firing from the enemy and battering down in a ditch, Dick was just scared out of his fucking mind and drops his lighter, which starts a chain explosion. Incredible.

He swaps dogtags with the smouldering hulk of Don corpse out of pure fear-based instinct. As he’s taking the body playing the role of Dick Whitman to his family in PA, he sees his stepmother with Uncle Mac and Adam on the platform. He stiffens for a moment of unadulterated panic as Adam recognises him on the train, but since he’s just a kid, Mac dismisses him pronto.

Some 50’s broad hits on him at that moment, being real insensitive about “that boy in the box” might I add, and he realises that being in some new persona could be of great benefit. He can be anyone he wants to be in that instant, and thus, Don is born.

Next up is the Season 1 finale.